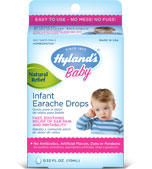 Temporarily relieves the symptoms of fever, pain, irritability and sleeplessness associated with earaches in children after diagnosis by a physician. The drops work directly to relieve the pain, itch and congestion with swimmer's ear or earaches due to colds and allergies. Safe for all ages.