WHAT IS "GRIPEWATER"?
"GripeWater is a liquid that has evolved over time in response to babies and children suffering from minor stomach discomfort. Handed down from generation to generation, it has been in use for over a hundred years and widely used in Europe and many other countries.

HOW DOES IT WORK?
MOM's gripeWater has a blend of ingredients, which have been known to be beneficial for easing stomach discomforts. GripeWater is considered to be more effective than regular antacid in many instances.

WHAT'S IN IT?
It also contains ginger and fennel, which are considered to be digestive aids. MOM's GripeWater is free of alcohol and sugan and contains no fillers, artificial colors or flavors, yeast, wheat, gluten, soy, dairy or starch. MOM's GripeWater contains sodium bicarbonate, which is widely used in many antachid preparations.

HOW IS IT USED?
MOM's GripeWater should be given prior to feedings if a baby exhibits distress during or after feeding. During the first few weeks it can be given to babies suffering from colic or gas. Adults suffering from gas have also been known to benefit from regular use of GripeWater.

It is administered orally by a dropper or a teaspoon. It can also be added to a baby's bottle. 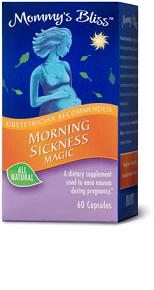 MOMs Morning Sickness Magic is a highly effective herbal supplement formulated to ease nausea during pregnancy. It also contains other essential ingredients that support a healthy pregnancy. a) Ginger to ease nausea and vomiting b) B-6 is frequently recommended by doctors to reduce and benefit the immune system. c) Folic Acid is as essential nutrient for normal fetal development. MOMs products are manufactured in an FDA Laboratory.

They use only premium quality ingredients that are all food grade, vegetarian and vegan, GRAS certified and toxicologist approved. It is made with the following ingredients: Sunflower, avocado and borage seed oils, shea butter and calendula. What it DOES NOT have is lanolin or beeswax, parabens or petroleum, gluten or soy.
It comes in a 1.67 oz. container with an ultra-hygenic pump and costs $11.99.