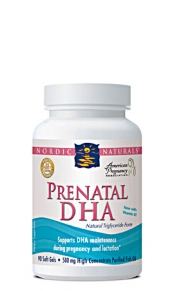 Omega - 3 oils support healthy development of the brain, eyes, nervous and immune systems*
Prenatal DHA:
Provides 450 mg of DHA, exceeding the minimum recommendations (300 mg) of daily DHA intake*
A woman's demand for DHA increases during pregnancy. DHA is essential for the proper development of infants and children, and offers mood and nerve support for mothers.*
Prenatal DHA is a convenient and effective way to ensure that mothers and their growing babies get enough of this vital nutrient every day. Surpassing all international standards for purity, freshness, and concentration, Nordic Naturals Prenatal DHA provides the benefits of omega-3 fats without the risk of toxicity. Ideal for pregnant and nursing mothers, these unflavored soft gels are half the size of standard soft gels, and are perfect for the most sensitive palate. Prenatal DHA provides the foundation for a healthy pregnancy.
Omega Woman:
This will assist all woman in maintaining hormonal balance. It will help to ease symptoms such as PMS, mood swings, and related skin afflictions. It has GLA from Evening Primrose Oil as well as the DHA and EPA from the cold water fish. Suggested is 2 capsules daily.
Omega - 3 Gummies:
This comes in a delicious tangerine treat for kids and makes a good companion to the Berries Multi-vitamins! Suggested use is for children 3 years and older to have 2 daily.
Nordic Berries Multi-vitamin:
According to Nordic folklore trolls would come out at twilight to gather cloudberries along the banks of the fjord waters. These berries are rich in vitamins, minerals and antioxidants and have a delicious sweet and sour citrus taste. The suggested use is for children over 3 to have 4 berries with food each day.
Vitamin D-3:
In 2008, the American Academy of Pediatrics raised it's recommended dose of Vitamin D to 400 IU's for children in response to the epidemic of vitamin D deficiency in our nation. Some experts think there may be a link to the explosion of autism since the early 90's when we started demonizing the sun. Now there is more cancer from "not enough sun" than "too much sun"! Most experts will encourage at least 1000 IU's in children a day and at least 5000 IU's for pregnant women. As always when you are pregnant, consult with your healthcare provider and do some research on your own! Each small soft gel is 1000 IU's.

For more information, order the Nordic Naturals Pamphlet
Free from fishy taste, Nordic Naturals offers naturally flavored oil and soft gelatin capsules through an exclusive and patented flavoring process. Third party testing shows positively no PCBs or heavy metals, exceeding FDA purity levels by 400 times. Nordic Naturals oils have been tested down to 2.5 particles per billion (a first in the U.S.).
What is DHA?
DHA (Docosahexaenoic acid) is a long-chain polyunsaturated fatty acid from fish. Omega-3 fatty acids are "essential" because humans are unable to synthesize them, meaning that they must be obtained through our diet. The brain in particular is very rich in DHA, where it increases outgrowth, and supports functions such as learning, memory and cognitive development.
Benefits during pregnancy and Lactation:
During pregnancy and lactation, proper nutrition with long chain Omega-3s appears to be especially important for the health of both the mother and child. Inadequate maternal Omega-3 intake during pregnancy is a risk factor for premature birth and low birth weight, diabetes and postpartum depression. DHA also appears to be very important to infants' visual and cognitive development. A recent study showed that children whose mothers had taken cod liver oil during pregnancy and lactation had higher IQs at age four than those whose mothers had taken a placebo. However, it is also important to note that exposure to environmental toxins found in certain kinds of fish, are associated with increased risk for low birth weight. It is therefore crucial for expecting mothers to seek out a molecularly distilled source of Omega-3 polyunsaturated fatty acids.
Ingredients:purified deep sea fish oil, soft gel (gelatin, water, glycerin, strawberry essence), strawberry essence, mixed tocopherols, rosemary extract.
One bottle contains 90 Soft Gel Capsules (45 servings of 500 mg of DHA)
Suggested Use:Two capsules daily, with meals, or as directed by your health care professional or pharmacist.